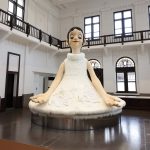 Tentative Opening of the Shin-Kojima-Kan Gallery (provisional name) has ended.

The Shin-Kojima-Kan Gallery (provisional name), a new exhibition facility of the Ohara Museum of Art, was tentatively opened on 1st October in 2021. Its building is the former Chugoku Bank’s Kurashiki Hommachi Branch Office completed in 1922 that was converted into an art museum, retaining its original figure.
Although the tentative opening has ended, preparations are underway for the grand opening.

After the grand opening (date to be determined), the exhibition will focus on works by Torajiro Kojima and objects from the ancient Orient, including Kojima’s collection.